Judas and the Black Messiah: The Murder of Fred Hampton 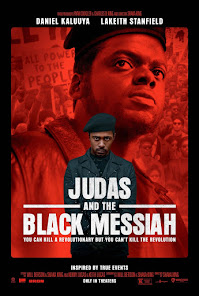 Observe as Republicans do everything they can to assure the assault on the US Capitol goes uninvestigated. See them pile onto the Blue Lives Matter bandwagon. Watch history repeat itself. In the 1960s, movements for social justice were routinely infiltrated by the FBI which, in turn, unleashed cops to make certain the power elite remained entrenched and threats to the status quo were eliminated.

The Black Panther Party (BPP) was among the compromised groups. The titular characters in Judas and the Black Messiah, are FBI informant Bill O’Neal (LaKeith Stanfield) and the target his puppet masters wish to put out of commission: Fred Hampton (Daniel Kaluuya), the leader of the Illinois BPP. That task came to completion on December 4, 1969, when Chicago police broke into Hampton’s apartment, gunned down Mark Clark, and assassinated the sleeping Hampton. In 1982, the FBI and Chicago PD silenced their deeds via a $1.8 million settlement.

The film isn’t a Hampton biopic, rather a dramatic take on the days leading up to his death. He was a charismatic figure who built coalitions. We see Hampton cross barriers to ally the Panthers with rivals such as the Black Disciples, Latinos in the Young Lords, and the Young Patriots, transplanted white Southerners who flew Confederate flags. His biggest failure was with the territorial Blackstone Rangers, who are inexplicably called The Crowns in the film in a failed attempt to make them a composite of street gangs.

Hampton’s fall began with the car theft arrest of O’Neal, the details of which are altered in the film. O’Neal is handed a Hobbesian choice: go to the penitentiary, or infiltrate the Panthers and incriminate Hampton. O’Neal opted to stay on the street and accept payoffs from FBI contact Roy Mitchell (Jesse Plemons). O’Neal rose in Black Panther ranks when Hampton was busted for allegedly mugging a Good Humor vendor. The presiding judge wanted to place Hampton on probation, but was pressured to impose a 2–5-year jail term at Hampton’s May 1969 sentencing. He made bail in August, was denied an appeal in November, and was assassinated weeks later. (O’Neal committed suicide in 1990.)

The film accurately reminds us that the BPP was also an effective grassroots social agency that distributed food and provided needed social services in poor areas. Much of what we see, though, is neither correct nor fanciful, but speculative. George Sams (Terayle Hill) is also pegged an FBI informant. He might have been, but that’s not certain. Likewise, director Shaka King and his crew backfilled Hampton’s relationship with Deborah Johnson–now Akua Njeri– (Dominique Fishback), who has steadfastly declined to comment on her relationship with Hampton, whom she married shortly after she became pregnant.

Some might accuse King of making the Panthers into justice-serving avengers by downplaying incidents in which they precipitated violence. In 1969, 14 police across the nation died in shootouts with the Black Panthers and in several instances, they were victims, not initiators. That was probably the case for two officers felled by BPP member Jake Winters (Algee Smith). Jimmy Palmer (Ashton Sanders) is a fictional character, but a total of 10 Panthers died during the period covered by the film, and Winters may have succumbed to blind rage as comrades died. The film also misleads in the mater of the Young Patriots. They come across as rednecks, but they were not exactly a 60s version of the Proud Boys; they leaned to the left, not the right.

Other such liberties are taken. None negate the fact that Hampton was executed, though the exact identity of his assassins remains so murky that script writers invented names for the badged killers. Hampton got it right when he said, “Politics is war without bloodshed while war is politics with bloodshed.” But who’s your money on, ideological street warriors, or better-armed forces commanded by autocrats like J. Edgar Hoover (Martin Sheen in a cameo) and Donald Trump?

Judas and the Black Messiah got six Academy Award nominations. Kaluuya deservedly won for his portrayal of Hampton, but it’s strange to get supporting actor hardware for what is obviously a lead role. (The film’s other Oscar win was for “Fight for You” as best original song.) Overall, Black Messiah is a good-but-uneven firm. Still, you should see it, learn about Fred Hampton, and understand how injustice festers like an open wound. Aside from Hampton’s demise, the saddest thing about the movie is that it feels more like today’s news than yesterday’s history.