The Mercies a Gripping Look at Witchcraft in 17th c. Norway 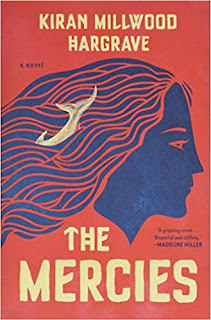 Of all the books I read during the Covid lockdown, The Mercies might be my favorite. It would be best, though, to cast doubt on the book’s marketing. You will see it reviewed and advertised as a “feminist” novel. I can see how some would wish to label it as such, though it’s more akin to The Handmaiden’s Tale in that it probes the state-sanctioned subjugation of women.

At its core are a few historical facts. It is set in the island village of Vardø, which lies in the northern- and eastern-most extremes of Norway. In 1617, a sudden storm drowned most of the male population as they fished offshore. Meanwhile far to the south, in Denmark, King Christian IV–who ruled Norway, Denmark, and parts of Scotland–enacted laws the next year aimed at suppressing witchcraft. If you think that Salem was tragic, consider that the 1621 trials in Vardø and the nearby mainland town of Finnmark led to the deaths of 91 “witches,” 77 of whom were women.

Author Karen Millwood Hargrave divides The Mercies into three parts, beginning with “Storm.” In the 17th century, gender roles were prescribed not optional. Women were not legally allowed to fish, chop wood, or till fields, but what is to be done when the men are gone? Maren has lost her father, her brother, and her intended. She, her Sámi sister-in-law Diina, and villagers Sigfrid, Fru Olufsdatter, and Kirsten spearhead a move to do for themselves. This outrages traditionalist “kirke women” such as Toril who think that God and their local minister will provide until a new commissioner arrives. Most island women think, though, that when he finally arrives, “he will be like their minister, having as little impact as snow falling in the sea.” This is decidedly the most feminist section of the tale.

Hargave then cuts to Bergen in 1619, where Ursa tends to her twin sister, a consumptive, while their struggling shipbuilder father, a widower, worries that Ursa will be an old maid. He is ecstatic when he makes a match for her with Sir Absalom Cornet, a pious Scot, who will be the new commissioner in Vardø. Ursa is a city girl with no desire to head north and worries about her sister, but she has no voice in the matter. Cornet, though, is not–to allude to the quote above–the most impactful of men, especially in the bedroom. He’s not the top dog in Vardø; in old landowning systems, that role was filled by the lensmann, akin to a feudal lord. He too is stern Scotsman, John Cunningham, also known as Hans Koning.

“Arrival” details Ursa’s early days on Vardø and the campaign of Cornet–via Koning–to restore Christianity to the region, by breaking women’s self-sufficiency, obliterating Sámi symbols, and herding women back into church. And you can bet that notes are being kept on the six women who don’t attend, including Diina, whose steadfast refusal to step inside a kirke confirms Toril’s belief that all Sámi are witches. Ursa is at first socially isolated on Vardø, though hiring Maren as a housekeeper both gains her insight and a friend. Other revelations are both unsettling and imperiling.

“Hunt” is the novel’s most harrowing section, which is self-defining by the time it rolls around. It bears observing that these witch trials are at the hands of Lutherans–the state church in Norway­–not Catholics. It should also be noted that 17 of those who died were Sámi–formerly called Lapps–and that they remained second-class citizens into the 21st century and continue to battle for full equality.

The Mercies is a nail-biting tale. As I suggested earlier, it’s a stretch to see it as feminist given its gruesome outcome. My sole critique of the book lies in a central relationship that tries too hard to be feminist and comes off as, at best, highly unlikely and, at worst, an anachronistic attempt to impose 21st century values upon the 17th. These matters are easy to overlook, though, given that Hargrave succeeds where too many fail. That is, she wraps long-ago historical events in homespun fictional yarn and makes them compelling.