In English and Korean (with subtitles) 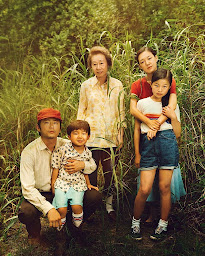 Minari is director Lee Isaac Chung’s semi-autobiographical remembrance of his boyhood. Set in 1983, it follows the Korean-born Yi family, which moves from California to Arkansas so that paterfamilias Jacob (Steven Yeun) can pursue his dream of farming his own land. Another reason is to provide his wife Monica (Han Ye-ri) with a slower pace of life so she won’t lose her job. Both need the income from their unglamorous job of sexing chicks.

Jacob promises that the land will soon Monica and their children: 7-year-old David (Alan Kim) and pre-adolescent Anne (Noel Kate Cho). Suffice it say that Minari is not a Korean version of The Biggest Little Farm. Steven fancies himself a savvy Americanized immigrant, but his confidence is greater than his understanding of how hard it is to find water, till long-dormant land, or generate enough money to escape the chick-sexing line. He bungles a few essential things, like money conversion. He nearly loses $100 to a church collection plate. In 1983, there were more than 2,200 Korean won to a U.S. dollar, so you definitely don’t want your Korean mind to kick in at such a moment!

Culture clash moments are among the film’s more memorable moments. The Yi family has left a Korean enclave in California to enter a world of trailer home living, the polite smiles of locals who (at best) see them as exotic, and charismatic Christianity. Hired man Paul (Will Paton) is so religious that he casts out demons and each Sunday shoulders a wooden cross on wheels down dusty roads.

It’s all too much for Monica, who threatens to return to California. Instead, Steven sends for her mother, Soon-ja (Youn Yuh-jung) to come live with them. She is a pistol and not necessarily the best role model for kids. Soon-ja sees no harm in teaching children adult card games or letting loose with Korean swears. She terrifies David, not to mention that he must share his bedroom with his crazy grandmother.

Much of the film focuses on Soon-ja’s relationship with the kids, especially David. She helps him overcome his shyness, thinks his weak heart is nonsense, and prescribes vigorous outdoor life. The two share a secret minari garden deep in the woods by a creek bed. (Minari is an edible member of the water dropwort family sometimes called Chinese celery, though it looks more like parsley.)

Minari captured hearts at Sundance and won various film awards around the globe. It was nominated for six Academy Awards, and Yuh-jong made history by be4coming the first Korean to win a best supporting actress Oscar. She did a nice job of playing a crotchety old woman filled the brim with joie de vivre. It’s not a pathbreaking performance by any means, though it’s probably deserved recognition given her competition. (Few have seen the films in which the other four nominees appeared, though I would argue that Olivia Colman had a meatier role in The Father.) Given a choice, I might have honored two different performances from Minari. Now 9-year-old Alan Kim is a heart-stealer who expertly handled a role in which he was akin to a small bird pecking away at his entrapping shell piece by tiny piece. Will Patton is at the other end of the performance spectrum. His Paul is a tetched evangelical Don Quixote, but he’s also a lovable, kind Korean War vet trying to live his faith as he understands it.

Not much happens in Minari that’s out of the ordinary. It was undoubtedly Chung’s intention to spin a yarn about an “American” family that simply happens to be Korean. The film is so much about everyday life–its triumphs, challenges, and tragedies–that instead of building to a dramatic conclusion, it simply ends with the Yi family opting to take root where they are. Minari is overhyped, but there’s no harm in partaking of a sweet slice-of life film, even if the portion is thinner than advertised.