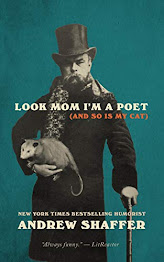 The best thing about Andrew Shaffer’s chapbook is the cover. Seriously. It’s festooned with a (vaguely) Victorian man holding an opossum. It’s all downhill from there.

Let's start with the title. Shaffer is not a poet. There’s a difference between doggerel and a dog’s breakfast. These days everyone who puts words into a rap or fills a screen with unorthodox spacing fancies themselves the next Amanda Gordon or Billy Collins. That's utter nonsense. Gordon is the heir to Langston Hughes, who a century ago wrote of the dangers of a dream deferred. Her poetry moves with the grace and rhythm of music and challenges America to live up to its ideals. Shaffer’s PR machine cranks out comparisons to Collins, a risible analogy. Collins is a treasure because of his wondrous mix of humor and profundity. Collins makes you laugh, then cringe; he makes you want to suck the marrow from the smallest sublime moments because life is fleeting.

Snark is not the same thing as the depth. Shaffer is also billed as a humorist. Silly me, I thought that actual “humor” was a prerequisite for being a humorist. Shaffer’s is the look-over-the shoulder naughtiness that stops being funny about the time an adolescent boy graduates from junior high school. Consider these lines prompted by seeing a t-shirt that reads, “I Have a Pretty Granddaughter. I Also Have a Gun, a Shovel, and an Alibi.”

I thought about telling him

that I have a shovel, too,

and that I was going to dig up his backyard looking for his granddaughter, because what the fuck, dude.

Perhaps his words appeal to pop culture addicts who think that dropping a few memes and brand names confers cultural capital. In “I Read Your Chapbook” Shaffer writes,

about love, whiskey, and scars.

Lord Byron would have drunk wine

from your tattooed hipster skull

while riding his pet bear

into the House of Lords

to his half-sister on the parliament floor.

Really makes you wonder, though:

When did he find the time to write?

It says it all to note this is his best work. As a poem it’s trite. It would, though, be a good standup routine.

In his (failed) efforts to write droll lines, Shaffer consistently goes for the cheap rather than transforming an inspired idea into a good poem. In “All Hands on Deck,” Shaffer discusses how numerous versifiers wrote submissions for The New Yorker after 9/11. He sets a melancholic tone that he ruins with: "Six months later, we received our rejections, our metaphors as unnecessary as another Ben Stiller movie…" This is the sort of line one utters at a party. Participants nod and give it the acknowledgment it deserves: "Good line dude.” Again, good standup material.

He does this throughout. In “Poetry Edgelord” he has an insightful moment in which he writes, “A poem is just a short story/without proper punctuation.” So why ruin it with childish references to Walt Shitman and William Turdsworth? Shaffer can’t even follow his own dictates. Later, he tries to pass off several children’s jokes about farts and witches as poems by arranging them as such. What do we wish to make of his observation after seeing the musical Hamilton:  "If Alexander Hamilton was such bomb- ass rapper, why did he ever bother with politics?" I will give Shaffer credit for at least knowing that imagining a cloud as penis-shaped deserves the title “Stupid.”

He has several repeating themes–“#SponsoredPost,” “Great Kentuckians of Kentucky,” and recurrent references to the Pittsburgh Steelers–that are so lightweight one expects them to fly away. They are akin to his “Carpe DM.” The entire offering reads: “Every day is a new/opportunity to say/”Fuck it all.” Ditto his observation in “Goodnight Moon” in which he offers this offbeat/off-color observation: “One person’s nightmare of being naked in public is another’s wet dream.”

It’s ironic that Shaffer skewers hipsters; Shaffer seeks to be one. If you don’t already hate hipsters, you will by the time you finish reading his work. Tell you what. Go ahead and preemptively hate them. I’ve saved you the trouble of reading this. Try Amanda Gordon and Billy Collins instead.