KITTY FOYLE: THE NATURAL HISTORY OF A WOMAN (1940) 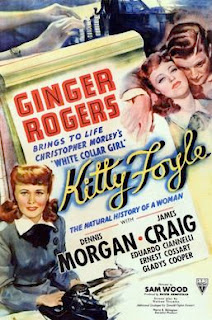 Ginger Rogers is best remembered as half of a hoofer team with Fred Astaire. Few today recall that she was so well-regarded that she was once the highest paid actress in Hollywood. Rogers won the Best Actress Oscar for her performance as the titular character in Kitty Foyle. Never once did she put on a pair of dancing shoes.

Kitty is a working-class gal from Philadelphia envious of the old-money families of the Main Line–the leafy suburbs along Route 1–and had a serious girl crush on Wynnewood Strafford VI (Dennis Morgan). Imagine her glee when “Wyn,” in defiance of his family’s wishes, decides to start a magazine and hires her as his secretary. The two fall in love and plan to marry, but is Kitty little more than another act of rebellion on Wyn’s part? A meeting with the impending in-laws (Gladys Cooper and Ernest Cossart) is all too much for the feisty Kitty, who quickly surmises the Straffords’ desire to put both she and Wyn in “proper” boxes.

Kitty leaves Wyn and Philly for the bright lights of New York City. Along the way she gains some sophistication as a salesgirl for Delphine Detaille (Odette Myrtill) in a shop that caters to the upper crust. She also meets a handsome doctor, Mark Eisen (James Craig) and plans to marry him, despite the fact that he’s on the bland side and poor as a church mouse. Wyn’s appearance in New York throws a monkey wrench into those plans. As it transpires, it’s easier to move than forget, plus Wyn can offer her a lifestyle she can only dream of. First, though, he has to extricate himself from the marriage (and child) he acquired after Kitty walked out.  (There’s another complication between Kitty and Wyn but I’ll leave that for you to discover.)

Kitty faces the age-old dilemma of head versus heart. Mark is rock steady and unestablished; Wyn is glamorous and wealthy. The latter is no trifling matter; the film debuted in 1940, a time in which the Great Depression had not yet ended. As the film wends its way toward its conclusion, all we know for sure is that Kitty is on her way either to marry Mark or run away to Argentina with Wyn. In essence, it’s a matter of whether Cinderella will marry the pauper or the prince.

Director Sam Wood works from a novel written by Christopher Morley turned into a screenplay by one of Hollywood’s most-talented script doctors, Dalton Trumbo. By today’s standards, Kitty Foyle will perhaps seem too much like a pawn moved by others. Even allowing for the differing expectations of 1940, Kitty’s motives often seem muddled at best, but Rogers is terrific in the role and mostly makes us root for her rather than doing a sociological dissection of pre-World War II gender relations. The film is billed as a hybrid drama/romance, but the quick-tongued Foyle/Rogers makes it seem more of a mildly dark screwball comedy.

I can’t promise that you’ll love the film, but I’m pretty sure you’ll never again think of Ginger Rogers as just a dancer. Another thing to keep in mind is that the film released on December 27, 1940. The following December–the 7th to be precise–an event at Pearl Harbor, Hawaii, altered American history. As an offshoot, it also changed expectations for women.