Sports Teams: What’s in a Name? 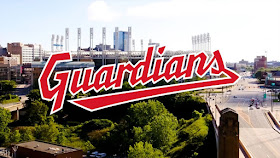 You’ve probably read that the Cleveland Indians will drop their nickname in 2022 and rebrand as Cleveland Guardians. The Guardians doesn’t float my boat, though I’m pleased they are dumping their racist moniker. This leaves just the Atlanta Braves, the Chicago Black Hawks, and the Kansas City Chiefs with problematic names among North America’s four major team sports and I hope they wise up soon.

Whenever teams change names, alarmists come out of the woods with apocalyptic predictions unless the decision is reversed. They also drag out tired old “heritage” arguments to defend the utterly indefensible. Actually, nicknames have changed a lot over the decades. Cleveland’s original 1870 surname was The Forest Citys [sic], a nod to the section of the municipality in which baseball was played. It was changed to The Blues in 1882, then to other names: The Spiders, The Infants, The Lake Shores, The Bluebirds, and The Broncos. In 1901, they signed superstar Napoleon Lajoie and became The Napoleons, which got shortened to The Naps. When Lajoie retired in 1915, they became the Indians as a joke. Cleveland once had a Native American player, Louis Sockalexis (1897-99), who wasn’t very good (and an alcoholic). “Indians” was an insult that stuck.

Many team names make sense: The Minnesota Twins pays homage to the “twin cities” of Minneapolis and St. Paul; the Denver Nuggets and San Francisco 49ers evoke the Gold Rush; the Detroit Pistons the auto industry; the Indiana Pacers to the car that leads the field at the start of the Indy 500; and the Edmonton Oilers to the oil sands outside the city. Others are obvious: Dallas Cowboys, New York Mets (short for Metropolitans), The Montreal Canadiens, and the Vancouver Canucks. Animal names are common–the fiercer the beast, the better–and lots of team names were chosen by fans, including the Buffalo Sabres, which is about the only lethal association one can make with that franchise.

Colors and long-forgotten words are also inspirations. Many early baseball teams wore distinctive hosiery, hence the Cincinnati Red Stockings, the Chicago White Sox, the Cleveland Browns, and eventually the Boston Red Sox, though they had previously been known by names such as the Americans, Red Caps, and Beaneaters. Both the New York Yankees and New York Knicks owe those handles to holdover terms from New York’s original Dutch settlers; the Boston Celtics–with a soft instead of a hard “C”–comes from the Irish population that once dominated its politics. For the record, the Yankees were originally called The Highlanders, but because of the grounds on which they played, not for Scottish reasons!

Here, though, are some origin stories with more obscure histories.

The Oakland A’s is shorthand for “Athletics,” and has been handed down twice. From 1901-55, the were the Philadelphia Athletics and from 1955-66, the Kansas City Athletics. The franchise moved to California in 1967. Today’s Kansas City Royals–a strange name for a nation with no inherited aristocracy and ditto the LA Kings–were an expansion team.  Actually, the Kansas City Royals are named for the American Royal, a livestock show held in the city since the 1890s.

In their “official” history, the Buffalo Bills are named for Buffalo Bill’s Traveling Wild West Show. That’s probably a load of hooey, as William Cody was from Iowa, not Buffalo. It likely has more to do with Buffalo’s Erie Canal terminus. Meat was often shipped via the Great Lakes to Buffalo and, from there, made its way to New York City and other Eastern Seaboard cities.

The Atlanta Braves doubly inherited their team’s name–­from the Boston Braves (1871-1951) and the Milwaukee Braves (1952-62). (The Brewers, a team name that makes sense, were a 1970 expansion team.) It ought not to be hard for Atlanta to part with “Braves,” except that racism is common in that neck of the woods.

The Chicago Cubs got their name for no good reason other than the fact that they had a lot of younger players when they joined the National League. The San Francisco Giants, by way of the New York Giants, had a lot of tall, burly players. The football team borrowed the name from the former National League baseball team—just like they borrow “New York,” though they play in New Jersey.

You can be forgiven if you think the word “Tax” should proceed the surname of the Los Angeles Dodgers. That’s not the reason, though. The franchise was in Brooklyn until after the 1957 season and was by then known by the diminutive of its most recent nickname “Trolley Dodgers.” (The franchise had many other names including The Bachelors and then, The Bridegrooms!) And, yes, tragic encounters between pedestrians and trolleys was a thing in urban America.

The Anaheim Ducks are, indeed, named for the 1992 Disney film The Mighty Ducks.

The Memphis Grizzlies? There are black bears, but no grizzlies in Tennessee. That nickname made a lot more sense when the franchise was in Vancouver, until the Grizzlies moved in 2001.

You’re hardly alone if you don’t associate Salt Lake City with jazz. The Utah Jazz, however, were originally the New Orleans Jazz, an appropriate name. Why Utah hasn’t changed the name is anyone’s guess.

If you’ve been to LA, you probably failed to notice a lot of lakes. Basketball’s Los Angeles Lakers was, until 1960, the Minneapolis Lakers playing in a state known as the Land of 10,000 Lakes. (There are actually more than 14,000.)

The Green Bay Packers play in the smallest city of any professional team and are the only professional team that’s community-owned. Nonetheless, Ernest “Curly” Lambeau would have never fielded a team in 1919 without a lot of investment from local meatpacking titans.

It’s alliterative, but that’s not why we have the Pittsburgh Pirates. There was a breakaway league in the 19th century—the Players League if you’re keeping score–and when it ended, Pittsburgh signed some players other teams thought were their property. That is, they “pirated” them. Pittsburgh was ruled to have acted within their rights but decided to embrace the label slapped onto them by detractors, a sort of “Oh yeah?” gesture.

The Detroit Red Wings came by their name in a (ahem!) round about way. Team founder James Norris (of Norris Trophy fame) played for a team called the Montreal Spoked Wheels in his youth. When he set up shop in Detroit in 1932, he intended the Red Wings as a sort of mashup of the Montreal team and Detroit’s automotive industry.

The Washington Wizards came to the District of Columbia in 1973, The team was, from 1963-73, the Baltimore Bullets. After a few years it dawned on team officials that “Bullets” was not a good name in a city with a distressingly high crime rate.