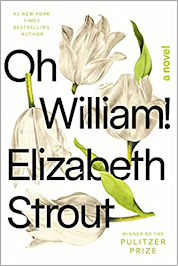 Fiction writers often say that their characters “surprised” them. It’s a mysterious-sounding but accurate way of saying that the logic of the narrative forces writers to consider what a character would do in a particular circumstance. In that sense, characters evolve personalities that are not necessarily how a writer first imagined them. That’s among the reasons why characters return for a second act, or a third or more. John Updike famously penned a tetralogy and a novella spotlighting Harry “Rabbit” Angstrom and won Pulitzer Prizes for two of them. It’s important, though, to know when to part with a character.

Elizabeth Strout wrote two Olive Kitteridge novels, won a Pulitzer for the first, and praise for the second. In 2016, she published the acclaimed My Name is Lucy Barton and followed the next year with Anything is Possible. Now, four years later, Oh William! is book three of the Lucy Barton cycle, though it’s ostensibly about her aging first husband. I was underwhelmed by Anything is Possible and less so by Oh William! One reason is that I find Lucy as relentlessly annoying as William is self-centered. Though she’s now in her 60s, a feted author, and the mother with two adult daughters, she remains a girl-woman. Were this a male character, I’m sure some reviewers would be screaming, “Oh, for heaven’s sake, grow up.”

Those who’ve followed Lucy know about her impoverished childhood and emotionally distant parents. Having grown up financially strapped myself, I’d not deny that such experiences can scar and carry over into adulthood, but most of us manage to move on. Not Lucy. As we meet her now, she’s recently widowed. Her first husband, William Gerhardt, now wants more from Lucy, though not in the way you might think.

William, an accomplished parasitologist, still goes to his university lab every day, though he no longer teaches. At 70, he’s not the womanizer he used to be either, but he remains the same emotionally challenged egoist that prompted Lucy to walk out on him and her young family decades earlier. He’s partnerless again as Estelle, his third wife, has left him. Although Lucy and William remained friends–he calls her “Button” and he is “Pillie” to her–neither is looking for any sort of made-for-each-other redemptive winter romance. What William really wants is for Lucy to go northern Maine with him.

Courtesy of an Ancestry.com gift from one of his daughters, William has learned he has a half-sister. He has no idea what he wants to do with that information except make his way to Houlton, a down-on-its-heels town on the U.S./Canada border in the middle of potato country. He hopes to figure out his next step when he gets there. Inexplicably, Lucy agrees to come along. There’s really not much to suggest why she would do so, other than the fact that his late mother, Caroline Trask Gerhardt, was one of Lucy’s early adult mentors.

The trip to northern Maine yields surprises about Caroline, William’s German father, and his half-sister, though surprisingly little about our two protagonists. Suffice it to say that those old enough to remember the Gerhardts don’t have much good to say about them, and that includes Lois, William’s previously unknown sibling. Alas, William and Lucy are the same woe-is-me whiny individuals we’ve seen before. I doubt it was Strout’s intention, but this part of the novel’s most revealing parts concern how places such as Bangor, Presque Isle, Fort Fairfield, and Houlton are closer to despair than to the American Dream.

The book’s title reflects the fact that Lucy repeatedly utters the phrase “Oh William!” She uses it to express surprise, sympathy, frustration, and futility. From this reader’s perspective, this repetition is more of a reflection upon a paucity of fresh ideas than any sort of emotional roller coaster. Still another indication is that Strout resorts to having Lucy explain things by referencing her novels; that is, she’s speaking in Strout’s voice rather than her own. Strout seeks to build parallels between Caroline and Lucy, but it ends up as a mechanistic contrivance rather than probing Lucy’s psyche. Perhaps that’s because Lucy doesn’t have much depth. For a character who has allegedly become a renowned author who has traveled extensively and feels at home among the chaos of New York City, Lucy is akin to a frightened gray rabbit. Lucy Barton was interesting to contemplate the first time, but not a second or third. Strout needs to move on. Lucy Barton is no Rabbit Angstrom.