The Lowering Days a Stunning Debut 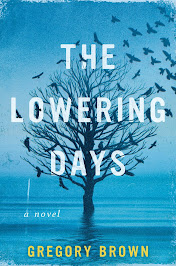 Lowering days are those of gloom and foreboding. One origin story, possibly apocryphal, holds that the phrase came from the spring day on which those who died in winter were removed from storage and buried. Gregory Brown's stunning debut novel borrows the concept for a ghost story without ghosts. It’s a spin-the-generations story about violence that reaches across time to look at debts never fully repaid and hard deaths in a hard place.

Brown hails from the Penobscot River basin of northeast Maine. The river bears the name of Native Americans who, along with the Passamaquoddy peoples, were the original inhabitants of the land. They still reside there, as do numerous mixed blood individuals. Courtesy of Maine’s Indian Land Claims Act of 1980, they stand to reclaim vast tracts of the sparsely populated region southeast of Bangor.

Brown’s protagonists are the Ames and Creel families. David Almerin (“Almy”) Ames narrates events we infer occurred in the 1980s. He is one of three sons born to Arnoux and Falon, he a Vietnam war deserter-turned-boatmaker, and she an attractive woman with a spine of steel who starts a local newspaper titled The Lowering Days. Lyman was a war hero, the father of two–daughter Wren and son Galen–and is husband to Grace, also a stalwart presence though she was something of a rebound wife. During their shared adolescence, Falon was pursued by three boys: Arnoux, Lyman, and Billy Jupiter who was part Native American. In the logic of small-town USA, Arnoux is now more popular because he made amends with his past through his craft, and Lyman is forever known as “Indian Killer because of a single drunken night in which all three boys were goofing around a cliffside raven-filled apple tree known as the Ghost Tree. They were trying to impress Falon, but Lyman's antics sent Billy over the side. In the here and now, Arnoux and Lyman barely tolerate one another.

Not much happens in such a hardscrabble region, but Japanese investors have shown interest in buying a long closed papermill. That is, until Molly, a 14-year-old native girl inflamed by environmentalism and an understanding of history, burns down the mill in protest for how it poisoned Penobscot waters. It probably would have been an unsolved crime had Molly not written an unsigned letter to the paper. Should Falon publish it? She knows that doing so has a high possibility of providing locals with enough clues to implicate Molly and maybe put her life at risk. There’s also the fact that family friend Moses Jupiter, a distant relative of Billy, is Molly's grandfather.

Many subplots emerge from this setup. Molly and her father Adam are on the lam in an area described as "water and wind so heavy and present, you screamed to escape it." The feud between Arnoux and Lyman reopens, spins out of control, and filters down to some of their children. Among other things, Arnoux’s sons Simon and Link commit an unthinkable act in a region in which fishing is the only real livelihood. How to heal such rifts? How to keep Molly safe? Lyman doesn't help matters when he lets his anger get the better of him and reminds locals of his old nickname.

The Lowering Days is so rich and so vivid that it's very hard to summarize it. Its themes and props include recurrent patterns of losing parents, premature death, mystical links to ancestors, banshees that cross oceans, cycles repeated and broken, race, fragmented love, ravens, a Penobscot legend of a woman who cut her husband to pieces in the name of love, and individuals pushed beyond their limits. Above all, it's a coming-of-age tale that could be subtitled “How Almy Became David.”

David's path to becoming a doctor begins when his uncle Reggie rebuilds a cabin near East Grand Lake Falls Lake on the Maine/New Brunswick border. David has serious issues to work out and a stint as a clinic doctor in the middle of nowhere helps. But this is by no means a summation or even a major theme, aside from a more general one of hurt, healing and redemption.

By far the most spectacular thing about a novel lies with Brown’s elegiac tone, which transforms remote places into a mystical and magical lands. The book is also filled with wisdom. When Arnoux explains to his children why he abased himself to Lyman he explains, “Because I want you to be able to remember what the right thing looks like.” David comes to grips with inner hurt when he begins to realize, “Sometimes love can't call love back…. People come and go and sometimes the debt to the departed ones long outlast their presence.” Moses punctuates this when he remarks, “Death is a circle. But they made it a line. Over time the link between the world of the living and the world of the dead got broken in people’s minds.” Reading The Lowering Days will help you repair that misconception.