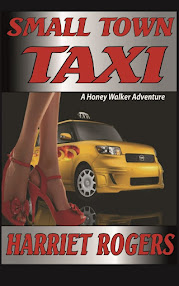 I love Northampton, the town in which I live. It does, however, lend itself to parody, as there's a tendency for people to take themselves too seriously. That applies across the board, from college professors to construction workers. You name ‘em–feminists, musicians, LGBTQ activists, liberals, neo-cons, panhandlers, poets, social workers–when they get up a good head of steam, they can suck the oxygen out of the room. I've often dreamt of hanging a banner across Main Street with the message, “C’mon folks, lighten up.”

I don't have to; Harriet Rogers has it done so in novel form. Small Town Taxi is the first of her Honey Walker series. It's a gentle lampoon of life in the 413 and a sendup of hard-boiled detective novels. Call it pulp fiction for the Pioneer Valley. Rogers knows her subjects well; she is the former owner of Skera Gallery. When you work downtown, you see the entire panoply of town characters.

Her protagonist, Honey Walker, was a homeless, ditzy college dropout who drifted into town when she was 21. When police Lieutenant Jon Stevens found her sleeping on a park bench, he didn’t bust her; he introduced her to the Cool Ride Cab Company. Honey took to driving her Scion XB cab like an otter takes to raw fish, even though the owner is a cheapskate and the dispatcher redefines the adjective surly. Honey lives in a small apartment–commentary on Northampton’s inflated housing market–but she's a tomboy with simple needs whose only fashion vice is shoe lust. Her take on herself is, “I am the girl who makes the phrase ‘they all look alike’ a reality,” though Stevens doesn’t think that’s true.

She's also the girl who trouble finds, an occupational hazard for a cabbie. Without giving away any of the plot, Small Town Taxi sports quite a cast: a trigger-happy lawyer, a highly educated plus-size black woman who occasionally works as a hooker, a Springfield crime family, a cookie-baking older woman who used to work for the FBI, several Keystone Kop-like hoodlums, and an assortment of hipsters, scrape-by residents, privileged moralists, and weirdos.

Rogers playfully­– if not always skillfully–satirizes testosterone-fueled writers like Mickey Spillane. She frequently resorts to stereotypes, but in order to turn the tables. For instance, it's women who are the primary horndogs; they are also the ones who are snarky and kick butt. Honey is so tough and raw that we expect her to grab her crotch and spit. The women in Rogers’ book figure things out, but usually in a bumbling fashion in order to round out her send up of detective fiction. There's plenty of colorful language and gunplay, but the body count is low.

Readers who know the area well have fun pulling away the veils that scarcely disguise real things. (Cool Rides, for example, is clearly modeled on Cosmic Cabs.) Some readers might get their dander up. Hampshire Heights, a public housing complex comes off badly, but Holyoke and Springfield even more so. Rogers is an equal opportunity satirist. Her very title is a dig. In a town nicknamed “Noho” it's hard to refute her observation that, “Northampton residents think of themselves as only one step from the Big Apple.” I laughed aloud at various places in the novel, even though some of my chuckles could be seen as self-deprecation.

At the end of the day, though, I'm not pushing the other three books to the top of my reading list. Small Town Taxi is great fun but it's also a one-trick pony, a high concept that might not be tall enough to sustain interest. This, of course, is a matter of individual taste and I’d not debate those who think “Noho” could benefit from a few more metaphorical slaps at pretense. Start with Small Town Taxi. If it makes you laugh, you might wish to hail another ride or two.