I have a book on my shelf titled Signs and Symbols in Christian Art. It did me no good whatsoever for my visit to the Museum of Russian Icons (MoRI) located in the pleasant Worcester County town of Clinton (13,435). It wasn’t useful for the simple reason that Roman Catholicism dominates Western Christian art and most Eastern Europeans were Orthodox, not Catholic. (Protestants often tend to be leery of art, especially in Pilgrim/Puritan New England, where adornment was often associated with unholy worldliness—still another reason why they seldom get invited to parties!)

For those who don’t know, Eastern Orthodox Christians made a definitive split from Roman Catholics in 1054; they were the heirs to the Eastern Roman Empire (Byzantium), as well as the intellectual traditions of ancient Greece. There are some similarities in the art of the East and that of the West: Jesus figures prominently in each and both venerated the Virgin Mary, but things begin to disintegrate from there. Orthodox Christianity rejects the supremacy of the pope and its leadership is more decentralized -- Armenian Orthodox, Greek Orthodox, Serbian Orthodox, etc.­—rather than concentrated in a pontiff in Rome.

Orthodox Christians also favor icons—representations of people or sacred events—over other religious trappings. They often build impressive churches—Hagia Sophia in Constantinople/Istanbul is one example, Moscow’s St. Basil’s Cathedral in Red Square another—but its followers were generally more literate and did not need as many visual representations as Roman Catholics. Small icons often accompanied worshipers to church, though they were not viewed as sacred in and of themselves. As the MoRI Website puts it, they were seen as “windows” to the sacred realm but are “purely functional.” In like fashion, Orthodoxy has saints, but they are not intercessors between congregants and God. If you know how to recognize Catholic saints, that won’t do you much good with Orthodox holy men unless they are Apostles. For instance, they have several named St. Nicholas, but they are not the ones you’re accustomed to seeing.

By now you might be wondering why there is a museum to Russian icons in Clinton, a small town that used to be known for its mills, especially those connected to the plastics industry. Like many (ahem!) unorthodox museums, it has much to do with the vision of a single individual: Gordon B. Lankton (1931-2021) who was an engineer in a Clinton plastics injection plant. Like many professionals, he had a pre-life before becoming financially successful. He went to Cornell, where he developed a deep interest in Russian culture. In 1956, he bought a motorcycle, put himself on a $5/day budget, and motored across Europe, Russia, the Middle East, and parts of Africa and Asia. He bought his first icon during a 1989 business trip to Russia and eventually collected more than a thousand of them before his death earlier this year. The MoRI is currently displaying a superb photo exhibit of Lankford’s 1956 sojourns.

It turns out that Lankford also knew how to capture amazing images in the lens of his travel Leica. It is, though, the icons that are the museum’s raison d’être. Perhaps you imagine that two floors filled with religious art would be either boring or too much of a good thing. That was exactly my fear before I entered. I don’t intend any sacrilege when I say that a visit to the MoRI is trippy. There are small icons that can fit in the watch pocket of a pair of Levis, metal-encased ovals suitable for homes, and multi-paneled paintings on wood that once graced churches. 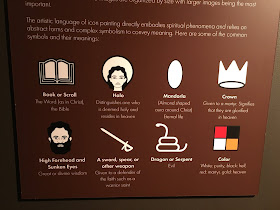 Because icons are functional liturgical items, most are unsigned and all are stylized rather than works of imagination. At first glance they bear resemblance to Venetian religious painting and appear to be standardized. Actually, that’s more true of Western religious art. If you look closely you will notice that two icons produced during the same period vary, especially in small ways. They are, of course, imbued with symbolism. Be sure to start in the basement for a crash course in some of the basic symbols and a primer on how to “see” icons.

The MoRI has been on my bucket list for years. Like all things that are roughly 90 minutes from one’s front door, actually go there was also on the dreaded “I can do that any old time” agenda of things that have an annoying tendency to never happen. Now that I’ve been there, return visits now top the bucket list.

By the way, a trip to Clinton also entails driving along the Wachusett Reservoir. The only larger fresh water body in Massachusetts is the Quabbin, though Wachusett is more open and it takes your breath away when it first comes into view.

*The above Not Made by Hands image of Jesus is a Russian take on Western legends such as Veronica's Veil and the Shroud of Turin.