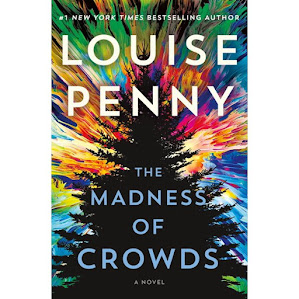 The Madness of Crowds is Louise Penny’s 17th Armand Gamache mystery. Is she running out of steam? Perhaps, though the new novel, set once again in her fictional village of Three Pines, is an improvement over last year’s All the Devils are Here. Longtime readers will find familiar characters such as bistro owners Olivier and Gabri, artist Clara Morrow, African-Canadian psychologist Myrna Landers, Gamache’s godfather Stephen Horowitz, and cranky poet Ruth Zardo and her pet duck Rosa. Needless to say, the Sûreté du Québec team of Gamache, Jean-Guy Beauvoir, and Isabel Lacoste is aboard, as is Gamache’s family. His wife Reine-Marie plays a role, as does his daughter Annie, who is married to Jean-Guy.

The Madness of Crowds is another of a spate of Covid-inspired novels. The title derives from an old book (1841) that once graced my bookshelf: Extraordinary Popular Delusions and the Madness of Crowds. As that title suggests, Penny takes a look at the phenomena of misinformation and the mischief it brings. Mischief comes in the form of Abigail Robinson, a university statistics professor. Stats profs aren’t generally the sort who make waves, but Robinson is an overnight social media sensation because of her controversial data linked to Covid. As we know, Covid has been particularly deadly for the elderly, those with compromised immunity systems, and those with physical challenges. Robinson’s data suggests that the best thing society could do is let such individuals die–a Darwinian culling of the herd that would reduce Covid transmission. She ups the ante by implying a form of modern-day eugenics and raises more ire by coopting a message of hope lifted from 14th century mystic Julian of Norwich. She wrote during the Black Death and is credited with assuring Christians that all shall be well again, rendered in Quebec as ça va bien aller.

It's easy to imagine why millions would be angered by an argument that it would be best to let loved ones die, kill off grandparents, euthanize the weak, and take steps to make sure that fetuses with birth defects such as Down syndrome children are aborted. Robinson insists she’s merely reporting what the data tell her, but half of Canada would like to lynch her. The problem is that the other half see her as a prophet and applaud her ideas. If you think such a plot device is farfetched, listen to what many otherwise “nice” people are saying about those who refuse to get Covid vaccinations. Robinson wasn’t on anyone’s radar screen in the Three Pines area, though, until she’s invited to give a lecture at the nearby Université de l’ Estrie (possibly obliquely patterned after the branch campus of Bishop’s University in Knowlton). When Gamache learns of the firestorm flaring around Robinson’s research, he asks an old friend, Chancellor Colette Roberge, to use her influence to stop the lecture lest it degenerate into violence. She declines on the grounds of protecting academic freedom and shocks Gamache by revealing she was the one who invited Robinson! Gamache cobbles together a Sûreté security detail but, sure enough, someone fires shots at the stage. Luckily no one was injured.

This is the opening act of what will eventually involve a murder, discussion of the 100th monkey theory of innovation, a trip to McGill University’s Osler Medical Library, skeletons lurking in various closets, and way stops involving the CIA and MKUltra. Not the most pleasant way to welcome in the New Year in Three Pines! Plus, it’s personal for Jean-Guy and Annie, whose daughter Idola is Down syndrome.  To the mix, add Haniya Daoud, a young Sudanese woman nominated for a Nobel Peace Prize. Myrna and Clara instantly regret their decision to host her as Haniya is an intensely dislikable and judgmental person who voices her views that Quebec is unlivable and its inhabitants are privileged idiots.

Once the murder occurs, Gamache and Isabelle must deal with too many suspects, not too few. Among the possibilities are Jean-Guy, the Tardif family, Daoud, Roberge, and Vincent Gilbert, the disgraced scientist/humanist that Penny readers recognize as the “asshole saint.” Nor can Gamache dismiss the possibility that everything, including the murder, was a plan to bring sympathy to Abigail Robinson’s burgeoning movement. The madness of crowds indeed.

The novel’s strength lies with questions it raises over popular delusions in the age of volatile news networks, the Internet, and impression management. Penny’s recent works have, however, suffered from drifting into histrionics, implausibility, and action thriller plots that aren’t Gamache’s métier. (He’s more of an Hercule Poirot type than a Bruce Willis action hero.) There is also a sense that Three Pines could use a few new actors, as the current regulars (sans Ruth) are growing stale. In the interest of full confession, though, I’ll admit that I’m such a fan that I ripped through the new book like a newly opened bag of Oreos.