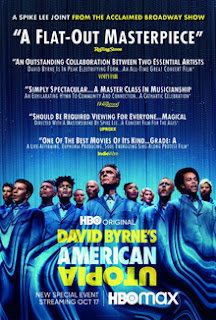 For September’s Artist of the Month, here’s something different, yet familiar. David Byrne has been a household name since his days as lead singer and guitarist for Talking Heads. In case you weren’t into post-punk music—yours truly went full folk and Celtic for much of the 1980s—Talking Heads was perhaps the most beloved of “new wave” bands. New wave groups took punk’s DYI approach to music, but didn’t totally reject commercial rock and pop. It mined them and created an arty hybrid.

Talking Heads recorded eight albums before disbanding in 1991. Byrne subsequently busied himself with solo albums, collaborative work with artists such as Brian Eno and St Vincent, and scores for everything from TV and film to dance and art installations. American Utopia was his 10th solo album and inspired a Broadway musical of the same name. In 2020, Byrne joined forces with director Spike Lee to film the show, which went into (very) limited theatrical release before being released on HBO. The limited release was probably designed not to harm the theatre box office, but the show has been a smash hit and opened a new season earlier this month. For those who don’t live in the Big Apple or don’t wish to sell body parts to buy Broadway tickets, Spike Lee’s film is the next best thing to seeing Byrne in concert.

Posters for the play generally render the word Utopia upside down. In many ways that’s appropriate. Although the Scottish-born Byrne has long been a US citizen and a devoted New Yorker, the play is simultaneously critical and optimistic. As he puts it, “We need to change. I need to change.” Appropriately, he utters this before launching into “Hell You Talmbout,” a Janelle Monáe song and litany of black people unjustly killed, such as Sandra Bland, Eric Garner, Freddie Gray, and Trayvon Martin. If this sounds as if Byrne is getting political, it’s not that simple. The show opens with him holding a (rubber) brain and musing on connections, including brain pathways, the molecular structure of the universe, and those between people. Byrne wants to explore ways in which we can become more fully human. The tone is set by the second song, the Talking Head’s “I Know Sometimes a Man is Wrong/Don’t Worry about the Government.” Byrne wants us to save ourselves from everything from climate change and racism to arrogance, isolation, and being lazy (including intellectual and moral laziness.)

The show, the film, and the music are jaw-dropping amazing. The play is not the same as the album. There are 21 songs plus a reprise of “Everybody’s Coming to My House,” the hit single from the American Utopia album, but only five songs come from that recording. The production makes you think, makes you anxious, makes you want to purify your social sins, and makes you boogie. It includes eight Talking Heads songs—including “Burn Down the House–and before the curtain drops, audience members are literally dancing in the aisles. All of the songs were penned by Byrne except the aforementioned Monáe composition and Fatboy Slim’s “Toe Jam.”

The production dazzles. Choreography was done by Brooklyn-based dancer and producer Annie-B Parson and is full of energy, verve, and nods to marching bands. Byrne loves marching bands, so his musicians are untethered. Thanks to wireless technology, even electric keyboards, bass, and electric guitar are free to roam. So too are the percussionists. All 12 cast members bang, scrape, or shake percussion instruments at some point, but half of them are primarily drummers. Lee’s overhead and back-of-stage camera work highlights both the simple (line marches) and the complex (weaves, zigzags). And let’s give a shout out to the principal dancers and backup singers, the lithe and stunning Tendayi Kuumba and the incredible Chris Giarmo. I don’t know why the bearded Giarmo is so heavily made up, but his pas de deux with Kuumba are so well-executed that they make Dancing with the Stars look like a junior high sock hop. Also heap praise on cinematographer Ellen Kuras, who makes us aware of the dynamic stage lighting that enhances American Utopia.

Byrne is, of course, front and center of the suited but barefooted ensemble. He is the draw and lead vocalist, but he’s also a fully engaged cast member. When he sings “I Dance Like This,” he indeed moves well for a 69-year-old, but he knows he’s no Kuumba or Giarmo. Our ears are on Byrne, but our eyes on the professional dancers, and the groove comes from Karl Mansfield’s portable keyboard, Bobby Wooten III’s bass, and Angie Swan’s electric guitars. Everyone sings. Byrne remains in fine voice, though there is a notable falloff in places, understandable for a soon-to-be septuagenarian.

You might not notice that last point and who could fault you? I return to the point that Byrne wants us to enjoy ourselves and to think. That continues through the coda, where he leads the entire bundled up crew for a post-show winter bike ride through the theatre district. Byrne’s both an avid cyclist and an advocate of a post-fossil fuels world. The only sour note is the pre-film “conversation” between Lee and Byrne. If only it had been. It was more a short-on-information mutual admiration/chuckle fest that stands in marked contrast to the show’s carefully constructed arc. It’s a good time to grab a bowl of snacks, sit back, and prepare to get connected. You will come away hopeful that our upside-down utopia can be righted.